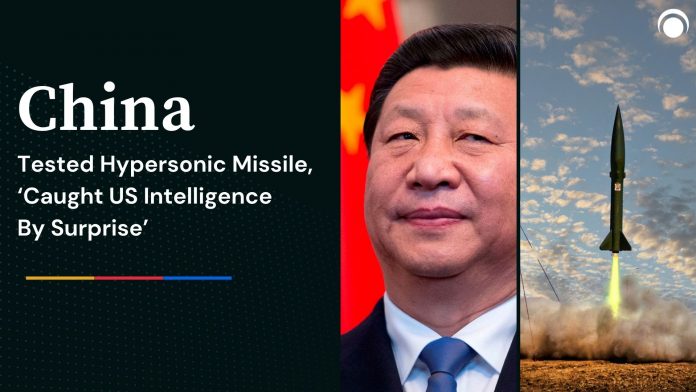 China has tested a new space capability with a hypersonic missile in August, the Financial Times reported on Saturday.

The report also stated that it has not just caught the US intelligence community by surprise but has demonstrated for the first time that the military technology gap between the two superpowers is smaller than the Pentagon has so far assumed.

Along with China, the United States, Russia and at least five other countries are working on hypersonic technology.

Hypersonic missiles, like traditional ballistic missiles which can deliver nuclear weapons, can fly at more than five times the speed of sound.

Scientists and engineers in the erstwhile Soviet Union developed FOBS in the 1960s. It involves launching a nuclear weapon into lower low-Earth orbit – around 150 km – where it will stay as it floats above the planet, before de-orbiting back down over the intended target. The Soviets were motivated by the US’s then-formidable missile warning network, all of whose observation outposts were pointed north – since the shortest path of a missile launched from anywhere in the Soviet Union (during the Cold War) would likely have been in the northern hemisphere.

According to a recent report by the US Congressional Research Service (CRS), China has been aggressively developing the technology, seeing it as crucial to defend against US gains in hypersonic and other technologies.

The report on the test comes as US-China tensions have mounted and Beijing has stepped up military activity near Taiwan, the self-ruling US-aligned democracy that Beijing considers a province awaiting reunification.

Taylor Fravel, a professor at the Massachusetts Institute of Technology and an expert on China’s nuclear weapons told the Financial Times that Hypersonic glide flies at lower trajectories and can manoeuvre in flight, which could make them hard to track and destroy.

Missile experts have contended that in this day of increasing satellite use and ground and atmospheric sensors, FOBS may not be any more advantageous than the ‘conventional’ intercontinental ballistic missiles (ICBMs).

“It is meaningless to discuss the credibility of the FT report. But it is important to note the unstoppable trend that China is narrowing the gap with the US in some key military technologies as China is continuously developing its economic and technological strength. China doesn’t need to engage in an ‘arms race’ with the US – it is capable of weakening the US’ overall advantages over China by developing military power at its own pace.”

Langbroek added in the same article that the Chinese FOBS’s advantage over the BMD could persist “unless [the US] chooses to continue to ignore China with regard to BMD, as they did until now”. According to him, the US’s logical course of action now could be to extend the BMD’s coverage and install anti-satellite missiles to counter the FOBS threat.

Aside from the North American missile defense system, there is another major problem with using FOBS to deploy nuclear weapons: it violates the Outer Space Treaty (OST). The OST entered into force on October 10, 1967. India is one of the signatories to the treaty, and in fact courted condemnation against its controversial anti-satellite test in 2019 because the test violated the spirit of the OST, as did the ASATs by other countries, including China. A functional FOBS, if designed to deliver a nuclear payload, would violate the OST on the same ground: for placing nuclear weapons in orbit.

The defence secretary Robert McNamara contended that a Soviet FOBS test hadn’t violated the OST because the weapon had de-orbited before completing a full orbit. In fact this is also how FOBS got its name: the ‘fractional’ is supposed to indicate that it doesn’t enter a full orbit.

But many experts, including Langbroek, have dismissed this argument of McNamara’s as an opportunistic technicality at best. The difference between entering orbit and being in orbit is trivial, also the FOBS vehicle needs to deliberately de-orbit to begin a downward trajectory. McNamara’s other argument carried more weight – that the Soviet Union’s test didn’t include a nuclear warhead and therefore didn’t contravene the OST.

For four days from October 1, China flew fighter aircraft into Taiwan’s air defense identification zone, not so subtly asserting its claim to Taiwanese territory. On October 14-15, the US and Canada responded by sailing the USS Dewey, a missile destroyer, and the HMCS Winnipeg, a frigate, through the Taiwan Strait – which separates China from Taiwan.

The US Food and Drug Administration (FDA) has rejected Bharat Biotech’s proposal for an emergency use authorization (EUA) of...
On This Day

Born on this day in 1809, in Kentucky Abraham Lincoln was an American statesman and a lawyer, who then...

US FDA Rejects Covaxin for Emergency Use Authorization; Updates on Students...