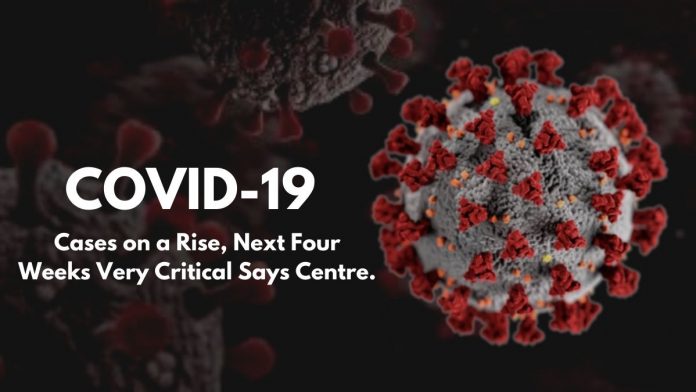 As the corona virus cases continue to surge the next four weeks are very critical, says the Central government. NITI Aayog Member Dr V K Paul said at a press conference, that the covid-19 situation in the country has aggravated with a steep rise in cases and that a large part of the population is still vulnerable to the virus. This comes after India, on Monday, reported 96,982 fresh covid-19 cases and 446 related deaths.

The Union Health Secretary Rajesh Bhushan added the Centre is worried about Maharashtra, Chhattisgarh and Punjab as they have been reporting the largest number of new cases and deaths in the country. He further said that the Centre has asked the state governments to increase the RT-PCR tests.

Earlier on Tuesday, the Delhi government imposed a night curfew from 10 pm to 5 am till April 30 as it recorded 5,100 new cases in the national capital. The centre said that COVID-19 is spreading at a faster rate across the country and alerted that the next four weeks are “very very critical” and urged people to take strict measures to control the second wave of the COVID-19 pandemic.

“Many people ask why shouldn’t we open vaccination for all. There are two aims of such vaccination drives – to prevent deaths and protect the healthcare system.” Union health secretary Rajesh Bhushan said at the press conference.

“The primary aim of vaccination is to reduce mortality among the most vulnerable class of people. Why did we prioritise some groups over others? Because in this phase of vaccination (till around July), vaccines will be in limited supply. Hence we have to prioritise it to the most vulnerable sections of society and this is an established practice across the world,” Bhushan spoke to news agency ANI.

Bhushan said that this prioritisation strategy of those more vulnerable is also backed by the WHO. “Along with the prioritisation, we are following a dynamic supply-demand mapping model to take decisions of when to open up vaccinations to other age groups,” he added.

This clarification from the central officials came a day after Maharashtra chief minister Uddhav Thackeray and Delhi chief minister Arvind Kejriwal wrote to Prime Minister Narendra Modi asking for a relaxation in the age bar and opening of new vaccination centres.

8 Asiatic Lions Test Positive in Hyderabad Zoo: Some Facts about...