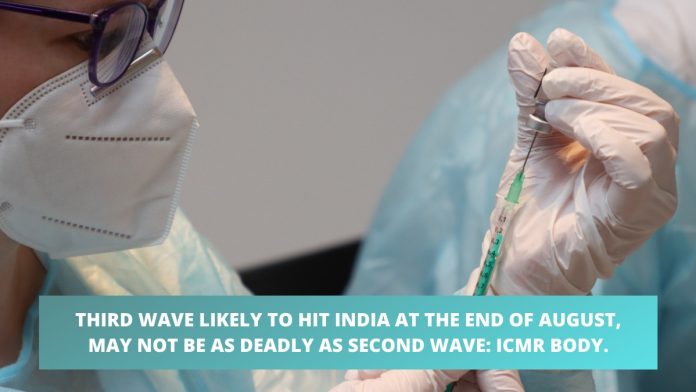 The third wave of coronavirus is likely to hit India at the end of August, although the intensity will be a little lesser than the second wave, Dr Samiran Panda, Head of Epidemiology and Infectious Diseases at the Indian Council of Medical Research, said. “There would be a nationwide third wave but that does not mean that it would be as high or as intense as the second wave,” Dr Panda told NDTV.

He also pointed out four factors that could lead to the third wave. The first is the drop in immunity acquired from the first and second wave. “If that goes down, it could lead to a third wave,” he said. The second factor is a new variant that can bypass the immunity acquired. Even if the variant does not bypass immunity, it might have a tendency to circulate faster, which he presented as the third factor. The fourth factor is the premature lifting of restrictions by states which is leading to a fresh surge.

The World Health Organization chief Tedros Adhanom Ghebreyesus warned that the world is in the ‘early stages’ of the third wave of Covid-19, driven by the Delta variant of the virus_. “We expect it to soon be the dominant COVID-19 strain circulating worldwide if it isn’t already,”_ the WHO chief said.

Dr Panda mentioned that both Delta and Delta Plus have swept the country and he was not expecting any more public health havoc from the Delta variant.

The Indian Medical Association said earlier on this week that the third wave is ‘inevitable and imminent’, pointing out that ‘in many parts of the country both the government and public are complacent and engaged in mass gatherings without following Covid protocols.’

On Thursday the Centre raised with the states the issue of violations in COVID-19 norms in many parts of the country. Few days back, the Health Ministry also said that the people are taking predictions about the third wave about as seriously as ‘weather predictions.’

The variant is found now in more than 111 nations, had first surfaced in India and was behind the devastating second surge of the virus.

Covid-19 May Reach Endemic Stage: ICMR Expert; All about Delta, Lambda and Other Variants of the Virus.

According to experts, the Covid-19 virus may reach its endemic stage just like influenza, in due course, and only...