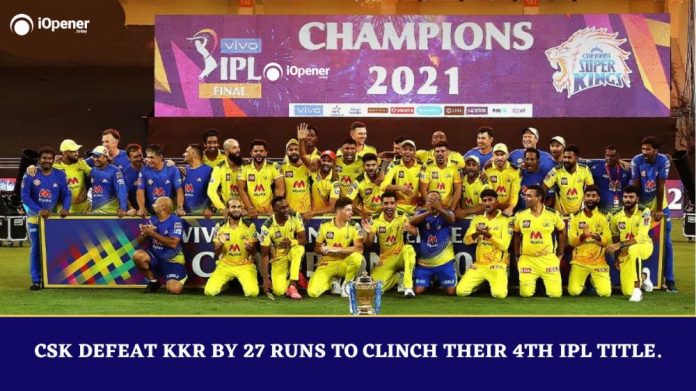 Chennai Super Kings defeated Kolkata Knight Riders by 27 runs and went on to clinch their 4th Indian Premier League (IPL) title in the final of IPL 2021 at the Dubai International Stadium on Friday. It was nothing short of a spectacular comeback for Dhoni and his team from having failed to qualify last year to being the winners this time.

Earlier, CSK scored a total of 192/3 fueled by brilliant knocks by the CSK batsmen. CSK openers Ruturaj Gaikwad 32(27) and Faf du Plessis 86(59) gave their team a fine start again. The duo strung together a 61-run stand before Gaikwad was dismissed by Sunil Narine for 32 off 27 balls. Du Plessis and Robin Uthappa then added 63 for the second wicket. Uthappa smashed 31 off just 15 balls as CSK continued adding runs to its board. Later Moen Ali joined the party with Du Plessis and scored a 37(20). KKR bowler Sunil Narine took 2 wickets for 26 in his 4 overs.

KKR got off to a steady start with brilliant batting by Venkatesh Iyer scoring 50 (30) and Shubman Gill 51(43). But no other batsman was able to capitalize on that and the KKR batsmen soon crumbled as a pack of cards. It all depended on Captain Eoin Morgan in the end but the skipper who has been out of form in the UAE couldn’t save his team either.

Meanwhile, Shardul Thakur was the man with the golden arm for CSK again, striking twice in an over to start the downfall of the Kolkata batsmen. Shardul ended up with three wickets while Ravindra Jadeja also took two wickets in an over. Australian bowler Josh Hazlewood too was brilliant, taking 2 wickets for just 29 runs off his four overs.

KKR could manage only 165/9 on their board in 20 overs as CSK went on for a comfortable win in the final of IPL 2021. This win added 4th IPL title for CSK and made it special for MS Dhoni who was playing as well as being captain on his 300th IPL match.

4G Services Back in Kashmir Region, After 18 Long Months