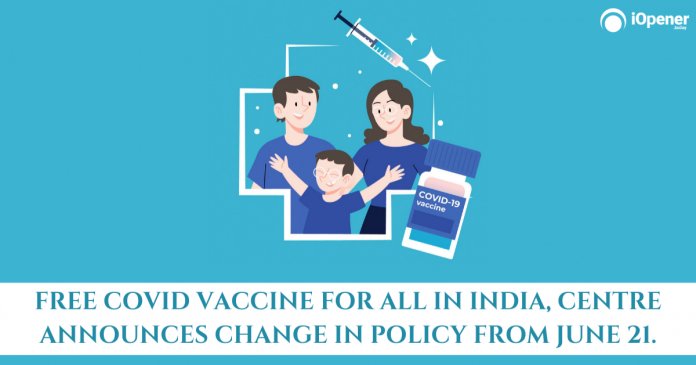 Free Covid Vaccine for All in India, Centre Announces Change in Policy from June 21

Prime Minister Narendra Modi made a major policy-shift in the covid vaccination program in India as he announced that from June 21 onwards the Centre will provide free COVID-19 vaccines to all state governments for inoculation of citizens above the age of 18.

“It has been decided that from June 21, all adults over the age of 18 will be vaccinated free,” PM said in an address to the nation. This comes on a day India recorded 100,636 new Covid-19 cases—the lowest in 61 days.

“Today, it has been decided that 25% of vaccination work being done by states will now be handled by Central government. This system will be implemented in the next two weeks. Both State and Centre will work as per new guidelines in the coming two weeks,” the Prime Minister said.

“Government of India will buy 75% of the COVID-19 vaccine produced by vaccine manufacturers and will give these to the states free of cost. This means, that states would not have to spend any money on procuring vaccines,” he added.

PM stated that till now, crores of citizens of India have received vaccines for free, now people above the age of 18 will also be added to this number.

He also added that those who do not want to get vaccines for free can opt-out of doing so and 25 per cent of vaccines produced by vaccine manufacturers will be available for private players. “Private hospitals can only charge Rs 150 as service charge on vaccines,” PM mentioned.

PM said that this is the biggest pandemic in the last hundred years and modern world had neither seen nor experienced such an pandemic. “Our country has fought together on many fronts during such a big global pandemic—from making ventilators to preparing a network of laboratories—to create a new medical infrastructure during the pandemic which has been the worst in the last century. The country fought on a war-footing,” PM mentioned in his address.

He said that the government supported the companies making the Covid-19 vaccine in every possible way. “Our country and scientists have shown that India is not behind big countries. Today when I am talking to you, more than 23 crore vaccine doses have been given in the country,” he added.

PM said that if we look at the history of last 50-60 years, we will know that it used to take decades for India to get the vaccine from abroad. Vaccine work used to be completed abroad, even then the work of vaccination could not start in our country.

Fire Breaks Out at Serum Institute, No Effect on Corona Vaccine Says Company

A massive fire broke out at Serum Institute, Pune, at around 2:45 in the afternoon on Thursday. It took...

Fire Breaks Out at Serum Institute, No Effect on Corona Vaccine...