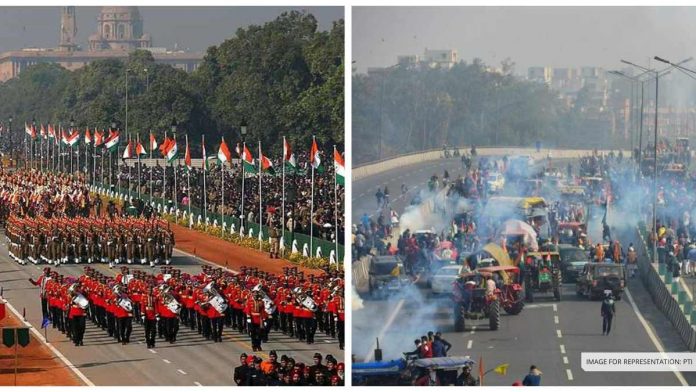 India celebrated its 72nd Republic Day, however, corona virus restrictions and the ongoing farmer’s protests in the capital region did take some of the sheen off the celebrations. President Ram Nath Kovind unfurled the national flag at Rajpath and took the salute from the marching contingents, which included one from Bangladesh – only the third country after France & UAE to do so.
In attendance for the parade were Prime Minister Narendra Modi and other dignitaries including Vice-President Venkaiah Naidu and Defence Minister Rajnath Singh. However, for the first time in almost six decades a foreign dignitary was missing from the celebration.

This year, the parade went terminated at the National Stadium at the C-Hexagon of India Gate while only the tableaux continued up to the Red Fort. There were also no veteran’s parades by ex-servicemen and women, motorcycle stunts by the Army and CAPF personnel.

In another first, the Rafale fighter jets took part in the Republic Day fly-past as the armed forces showcased its T-90 tanks, the Samvijay electronic warfare system and Sukhoi-30 MKI fighter jets on the Rajpath on Tuesday. A total of 32 tableaux — 17 of various states and UTs, nine of ministries and six from the defence arm were seen going down Rajpath. For the first time among these, the tableaux of Ladakh were included.

Due to the ongoing corona virus pandemic the crowd sized allowed to witness the parade was reduced from 1.25 lakhs to just 25,000 and the size of marching contingents were reduced from 144 to 96 due to social distancing measures. Also, all members of the tableaux contingents from various states, ministries and government departments underwent Covid testing.

Wishing the citizens on the occasion of the Republic Day, Prime Minister Narendra Modi paid tribute to India’s great social, cultural heritage, as well as the strategic strength and bows to the Constitution that gives life to the world’s largest democracy.

Interacting with NCC and NSS cadets and Tableaux artists at his residence who will participate at the Republic Day Parade, Mr Modi said, when they parade on the Rajpath with zeal, every citizen is filled with enthusiasm and energy. He said, when they show a glimpse of the rich art, culture, tradition and heritage of India, the countrymen are filled with pride.

The republic day was also marred by scenes of chaos and violence as some of the the farmers camping at Singhu, Tikri, and Ghazipur border started breaking police barricades to enter Delhi. They entered the Red Fort and waved their flags from the ramparts and Cops had to resort to the use of force to disperse the crowds.