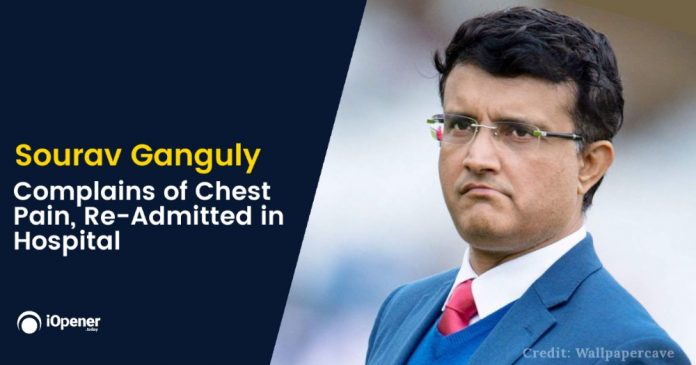 BCCI President and former Indian cricket team skipper Sourav Ganguly has been admitted to Apollo Hospital in Kolkata, after he complained of chest pain and uneasiness on Wednesday morning. According to sources close to the family, he had been complaining of a mild pain and slight uneasiness since Tuesday evening, and it was decided to admit him in the hospital as a precautionary measure.

According to latest reports as widely published in the Indian media, the skipper’s condition is stable and doctors are conducting preliminary investigations to ascertain if there is any cause for concern.

Ganguly had undergone an angioplasty earlier this month on his right coronary artery at Woodlands Hospital, following a mild heart attack. Although he had been discharged a few days later, doctors did advise him to undergo an angioplasty on other coronary arteries as well, which had been deferred at that time.

“A nine-member medical board of the Woodlands Hospital had on January 4 concluded that angioplasty on Ganguly’s other two coronary blockages, LAD and OM2, will be done at a later stage,” said a report on NDTV.

Woodlands Hospital MD and CEO Dr. Rupali Basu had certified Ganguly to be clinically fit before his discharge.

According to news reports in the Bengali media, the BCCI President walked into the hospital on his own, without any assistance and was taken into the Emergency Department for a check-up. It is likely that he will undergo stenting for the other blocked arteries.

Fans of the elegant left-hander took to various social media sites to express their shock and extend their best wishes as the news of his hospitalization spread across the country. Dashing Indian opener Shikhar Dhawan extended his prayers and wished ‘dada’ a speedy recovery, whilst one of India’s leading women cricketers, Mitali Raj, also sent in her best wishes on Twitter.

In an annual proliferation index, Broker discovery and comparison platform BrokerChoose, has revealed that India, with 10.07 crore users,...

What is one thing you would want to change to improve...