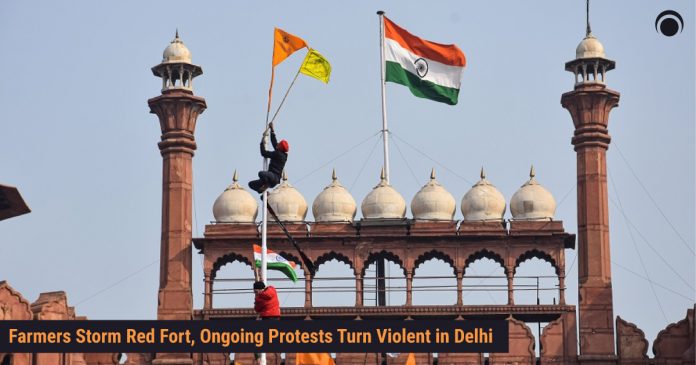 Thousands of farmers drove their tractors into the nation’s capital, New Delhi, on Tuesday, as part of the ongoing nationwide protests against the controversial agricultural laws that farmers claim put their livelihoods at risk.

The farmers who had been camping out in protest on the outskirts of the capital for more than two months were joined by others, including young farmers from the northern states of Haryana, Uttar Pradesh, Punjab and Rajasthan who had gathered on the border over the past few days for the planned march on India’s Republic Day.

In an attempt to contain large crowds of protesters in tractors and on foot from breaking through barricades, the police had to resort to tear gas shelling and flash bangs. Both parties were spotted with large sticks in the streets. The tear gas and batons were used outside the Delhi Police Headquarters and at two bordering areas of the city as some farmers had started crossing the barricades.

At the Ghazipur border between Delhi and Uttar Pradesh, police used tear gas and batons to push back about 2,000 protesters, and tear gas was also used at the Singhu border between Delhi and Haryana on Tuesday morning, according to Ashutosh Mishra, a spokesperson for All India Sangharsh Coordination Committee, one of the unions leading the protests.

Some of the protesting farmers broke through police barricades around the capital and entered the grounds of Delhi’s historic Red Fort on Tuesday, in chaotic and violent scenes that marred the country’s Republic Day celebrations. Among dozens of injured police personnel and protesters, one protester was confirmed dead.

“We have broken the barricades, we have our tractors, people are marching, some leaders are also on horseback… thousands of farmers have already reached the capital,” Katyal said.

Farmers planned their march to coincide with the government’s parade. The massive protests were a significant challenge to Prime Minister Narendra Modi, as months of demonstrations and sit-ins across the country against his key agricultural policy measures have ended up in a stalemate marked by deadlocked talks between farmers and his administration. The government has held 11 rounds of talks with leaders of more than 30 farmers’ unions that are opposed to the laws – but the talks have not yielded any concrete solutions to the standoff.

Mobile internet services were suspended in some parts of Delhi and some metro stations were shut, in the aftermath of the protests turning violent. As the clashes continued into the afternoon, home minister Amit Shah met Delhi police to discuss how to get the protests under control.

Standing on the ramparts of the Red Fort was Diljender Singh, a farmer from Punjab, who held aloft the Nishan Sahib, the flag of Sikhism.
“We have been protesting for the last six months but the government didn’t bother to listen to us,” Singh said. “Our ancestors have charged this fort several times in history. This was a message to the government that we can do it again and more than this if our demands are not met.”

Samyukt Kisan Morcha later called off the march, and denounced the “anti-social elements” which had “infiltrated the otherwise peaceful movement.” The statement thanked farmers for their “unprecedented participation” in Tuesday’s event, but expressed regret over the “undesirable and unacceptable events that have taken place today” and dissociated the group from “those indulging in such acts.”

Delhi police spokesman Eish Singhal said that officers had “showed a lot of restraint till the end but agitators defied the conditions and started their march before the scheduled time, and chose the path of violence and sabotage.”
Singhal added that in view of this, it was necessary for Delhi Police to “maintain law and order,” adding that the clashes had damaged property and injured a number of police personnel.

According to Yogendra Yadav, a leader of the farmers’ protests, farmers’ unions also plan to march to Parliament on February 1, the day that the Parliament will hold its budget session.

In a major embarrassment to the Government of India, and a major victory for the protesting farmers, the Supreme...
General News

The ongoing farmer agitation will continue as the protesting unions unequivocally rejected the amendments proposed by the Central Government....