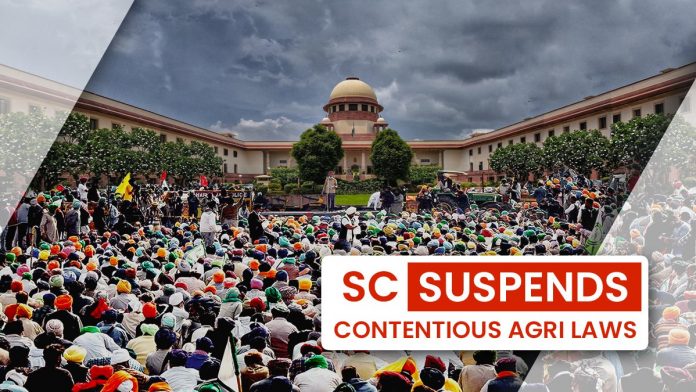 In a major embarrassment to the Government of India, and a major victory for the protesting farmers, the Supreme Court of India has stayed the implementation of the controversial agricultural laws. The top court ordered the constitution of a committee that will handle the negotiation with the farmers, to resolve the ongoing stalemate between the farmers & the union government.

Passing the historic order, the judicial bench headed by the Chief Justice of India SA Bobde also urged the protesting farmers to cooperate with the negotiations, in order to amicably resolve their grievances.
“We are forming a committee so that we have a clearer picture. We don’t want to hear arguments that farmers will not go to the committee,” said the bench.

Taking exception to the ongoing agitation, the Chief Justice said these were now matters of life and death, and that the court was concerned about the lives & property associated with the agitation.
“We are trying to solve the problem in the best way. One of the powers we have is to suspend the legislation. We want to solve the problem and that’s why we are making the committee. Give the names to us, we will decide,” the Chief Justice added.

Meanwhile, the farmers termed the order a huge victory for the unions with Advocate AP Singh, representing some of the farmer unions, calling it a victory for all the farmers in the country.

The committee formed to find a resolution to the agitation and address the grievances of the farmers will comprise of Shri HS Mann, Pramod Kumar Joshi, Ashok Gulati, and Anil Dhanwant. However, the CJI categorically asserted that the suspense of the farm laws for the time-being was to facilitate a solution to the agitation and should not be taken as a repeal of the same. He expected that the committee would make sufficient progress in finding a resolution.

“All can give response to the committee, both for and against. And we will accept the committee and deal with the farm laws,” opined Chief Justice Bobde.
“This committee will be for us. All of you people who are expected to solve the issue will go before this committee. It will not pass an order or punish you, it will only submit a report to us.”

“This is not politics. There is a difference between politics and judiciary, and you will have to cooperate,” the CJI appealed to the farmers unions.

As the Central Government hopes to control the spread of Covid-19 with the new phase of vaccination starting May...
General News

Thousands of farmers drove their tractors into the nation's capital, New Delhi, on Tuesday, as part of the ongoing...
General News

The ongoing farmer agitation will continue as the protesting unions unequivocally rejected the amendments proposed by the Central Government....