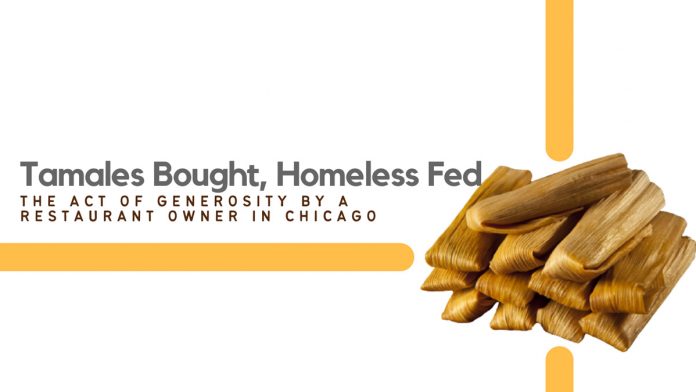 Tamales Bought, Homeless Fed – The Act Of Generosity By A Restaurant Owner In Chicago

Robert Magiet, a Chicago restaurant owner of TaKorea Cocina started buying Tamale – a traditional Mexican dish, made of masa or dough from the local vendors, thus helping them and feeding the homeless.

Last Friday morning, Robert Magiet was driving through Humboldt Park. It was very cold outside when he noticed a woman selling tamales.

“She looked like she had five layers of clothing on,” Magiet said. “I said, ‘Can I buy all your tamales and you can go home?’ She had maybe 10 dozen on her.” She agreed to it and he took the bags of tamales and distributed them to people staying in nearby homeless encampments.

And that’s how an unplanned tamale crusade began.

He posted a selfie with the tamale vendor that afternoon on Facebook. The post states as “Anyone know of any Tamale Cart vendors that will be out this weekend in the cold weather?” he wrote. “I went to Yolanda near Humboldt Park and bought her out so she could go home today. I’d love to do the same for other Vendors and distribute the Tamales to our Neighbors experiencing homelessness. Let me know of any leads please.”

“You have to remember some of these vendors are used to selling 30 dozen tamales a day. But not many people are leaving their house right now. For months they’re standing out there not selling that many tamales,” Magiet said.

Suddenly he realized that he needed to arrive at 5:30 a.m. to increase the number of tamales he could purchase from vendors and distribute among the needy.

For over a week, Magiet has been purchasing cartloads of tamales from vendors in the Logan Square, Humboldt Park and Avondale neighborhoods.

Robert Magiet owns TaKorea Cocina, a small cafe in Ukrainian Village. His restaurant was one of the city’s first host sites for a Love Fridge that arrived in June. It is one of more than a dozen community refrigerators around Chicago that are stocked with healthy food for anyone in need to take for free.

“If somebody in our neighborhood is struggling, we all struggle, that’s how I feel,” Magiet said.

Reginald Hammond, Women’s Food Coordinator of Breakthrough Ministries, says he is thankful for Magiet’s generosity. It’s their appreciation that keeps him going most days, says Magiet.

The one man’s tamale crusade has allowed dozens of vendors to get off the cold street so they can be home in warmth.

“Why not help others?” Magiet said. “We’re all neighbors. We’re all Chicagoans.”

Every one who is seriously involved in the pursuit of science becomes convinced that a spirit is manifest in...
Pearls

A fine glass vase goes from treasure to trash, the moment it is broken. Fortunately, something else happens to...
Pearls

Give all your worries and cares to God, for he cares about you. - Bible

An Overview of Career Opportunities in Civil Engineering – Part 1