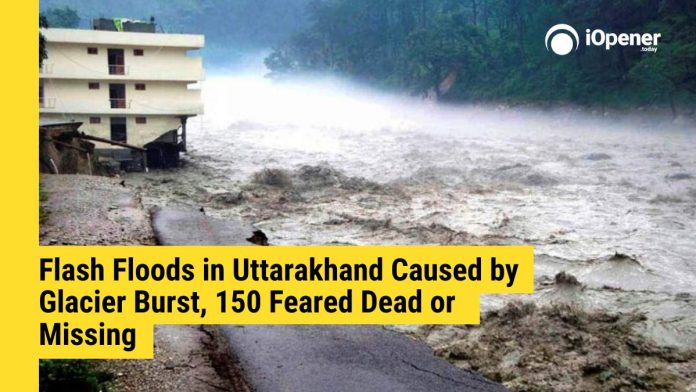 In one of the worst natural disasters to have hit the mountainous state of Uttarakhand, a sudden glacier burst in Reni village of Chamoli district triggered massive flash floods endangering the lives of the people living downstream of the Dhauli Ganga river. About 150 people are currently feared to be missing or at worst dead because of the flash floods.

Following the glacier burst, a high alert has been sounded in the districts from Chamoli to Haridwar as a precautionary measure. The state administration swung into action alongside personnel of the Indian Army, and Indo-Tibetan Border Police for relief and rescue efforts.

The floods have caused large scale devastation in the upper reaches of the ecologically fragile Himalayan region. Thus far, the Indo-Tibetan Border Police officials have recovered around 9-10 bodies from the National Thermal Power Corporation site in the Tapovan area of the district. The Rishiganga power project has sustained major damages with 50 people missing – all of whom are labourers, working at the dam site at the time of the incident.

Uttarakhand CM Trivendra Rawat undertook an aerial survey of the affected areas and has convened a high-level meeting with various officials from the different agencies coordinating relief & rescue operations, to improve coordination and streamline the efforts.

“I am back in Dehradun after reviewing situation on the ground. I am now meeting disaster management team comprising of state officials and that from Army and ITBP,” the CM said in a brief statement on social media.

“Medical teams have been rushed to the affected site. 30-bed hospital has been kept ready at Joshimath for dealing with this emergency. Hospitals in Srinagar, Rishikesh, Jollygrant and Dehradun are on standby. We are doing our best to deal with this disaster,” he added.

The Prime Minister and Home Minister have both spoken to the CM and have offered all the necessary help from the union government to help the state government in this time of calamity.

“We are getting news about the disaster in Uttarakhand…I am in touch with state CM, NDRF chief and Home Minister. Rescue efforts are on in Uttarakhand…relief and medical help is being provided. We are doing everything that we can to help the affected,” said Prime Minister Narendra Modi.

Home Minister Amit Shah also spoke to Chief Minister Trivendra Singh Rawat as well as the DG of ITBP and DG of NDRF to take stock of the relief measures.

“All the officers concerned are working on a war footing to secure the people. NDRF teams have left for rescue operations,” confirmed the Home Minister Amit Shah.

Several leaders from both the state and central levels, cutting across party lines, have expressed solidarity with the citizens of the state, offering their prayers and thoughts in this difficult time.

Currently, 100 personnel from the Indian Army and 250 from the ITBP are involved in the rescue operations, while several columns of the National Disaster Management Force have also been mobilized. The Army has pressed into action 3 helicopters for airlifting survivors and relief material, while 600 personnel from the Army & ITBP are also on standby alongside seven Indian Naval diving teams for dealing with any emerging situation, the office of the CM has confirmed.

Facebook
Twitter
Pinterest
WhatsApp
Linkedin
Email
Print
Telegram
Previous articleTamales Bought, Homeless Fed – The Act Of Generosity By A Restaurant Owner In Chicago
Next articleThat Tide in the Affairs of Men – Part 2 of 5 Standardized Tests to Check your Aptitude