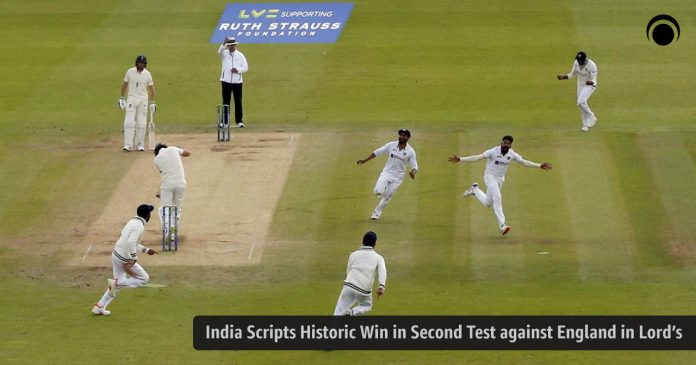 India scripted a historic win at the Lord’s Cricket Ground on Monday as they beat England by 151 runs in the second Test after a period of seven years in test cricket. Mohammed Siraj, Jasprit Bumrah, Ishant Sharma and Mohammed Shami swung the match in India’s favour on the final day to help the visitors register only their third Test win at the Home of Cricket. The previous two triumphs for India at this venue came 28 years apart, by five wickets in 1986 under Kapil Dev and by 95 runs in 2014 under MS Dhoni.

Earlier, India had declared their second innings on 298-8 just after lunch with England requiring 272 to win in 60 overs. The hosts were neither able to chase the target nor stand against the highly spirited Indian bowlers. Mohammed Siraj finished with 4 wickets while Bumrah took 3 wickets for 33. Ishant Sharma finished with 2 wickets and Shami got 1 as Indian fast bowlers bowled England out in quick succession.

England would have thought of an easy win at the start of the day’s play when India resumed their second innings at 181 for 6 with a lead of 158 runs, and they even made the perfect start as Ollie Robinson got rid of the overnight batsman Rishabh Pant (22) and Ishant Sharma (16) to leave India struggling at 209 for 8 in the first half-hour.

That’s when the match completely changed into India’s favor as India charged back into the match with a record 9th-wicket partnership between Shami and Bumrah, which took the possibility of an English victory out of the window.

The partnership between Shami and Bumrah stunned the English fast bowlers as they were quite impressive with their batting technique as both tail-end batsmen played perfectly in tough conditions. The 89- run partnership is India’s biggest stand for a ninth or lower wicket in Tests since Shami added 111 for the tenth wicket with Bhuvneshwar Kumar in 2014 also against England.

This partnership took India’s score from 209 to 294 for 8 by Lunch with Shami having scored his second Test half-century. He hit a four off James Anderson right after play began and that’s when Kohli decided to declare the innings in the middle of the 110th over with India reaching 298 for 8.

Shami remained unbeaten on his best-ever Test score of 56 while Bumrah remained not out on 34 as India set England a target of 272 runs to win.

To add to the celebrations, the duo took just 10 minutes for changeover before coming back to provide the perfect start with the ball as both Bumrah and Shami struck in the first over of their spells.

Bumrah removed Rory Burns for a duck in the first over before Shami took the wicket of opener Dom Sibley, also for duck.

Later, Bumrah struck the England line-up with the wicket of Root for 33 in the first over of the final session before Mohammed Siraj sent back Moeen Ali and Sam Curran off successive deliveries to heat up things in the middle.

The first Test had ended in a draw at Trent Bridge earlier this month after the final day was washed out. The teams will now enjoy a short break before regrouping for the third match of the 5- match Test series at Leeds from August 25.

Kohli meanwhile stated that India has now developed a pattern where the wins are not due to the heroics of one player, but all 11. “KL and Rohit, had an outstanding partnership on day one,” the captain told bcci.tv which conducted interviews with some Indian players after the Lord’s win. “The opposition put us [in] and [they thought] we were going to get blown away. Just the character we showed, to get a result in 60 overs on day five when the pitch was not offering anything to the bowlers… all I can say is I am really proud of the team. We have had some amazing overseas wins but this one is right up there just because of the belief and character we showed and that’s been the hallmark of our team.”

“To win a Test match like that you need character and that’s exactly what everyone showed, not just one or two guys, but all 11 came together at different stages, put their hand up and took the responsibility. And that’s a great sign.” Rohit Sharma said after the Lord’s win.