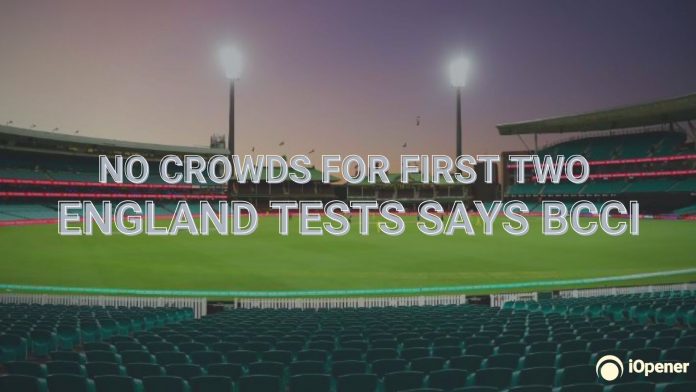 The first two test matches between India & England to be played at the MA Chidambaram Stadium in Chennai will be played behind closed doors and without any crowd. This decision was taken by the BCCI in consultation with the TNCA.

First two matches of the four-test series are scheduled from February 5th to 9th and February 13th to 17th respectively. Both teams will then travel to Ahmedabad for the final two Tests that will be played at the newly constructed Sadar Patel Stadium from February 24th to 28th and from March 4th to 8th.

The TNCA secretary R Ramaswamy recently sent out a circular to the association’s members saying, “ In view of the prevailing Covid pandemic, BCCI has decided not to take any kind of risk with the safety of the players during the forthcoming India-England Test series. As per BCCI directive, the first two Test matches will take place behind closed doors (No Spectators/ Guests/ Sub-Committee Members) as a preventive measure.”

The decision to conduct the matches was taken despite the government order which stipulates that crowd up to 50% of the capacity is allowed for outdoor sporting evening.

“For outdoor events, spectators will be allowed upto a maximum of 50% of the total capacity of the stadium,” the Indian Ministry of Youth Affairs and Sports had said while putting out a note on December 26. The note was part of the “standard operating procedures and guidelines for conducting sporting competition in India in the Covid-19 environment.”

Meanwhile, the third and fourth test matches could well have a crowd as Gujarat Cricket Association is likely to allow spectators into its area.

A senior official at the Gujarat Cricket Association, remained optimistic of having some section of the ground open to crowds. In 2020, the refurbished Motera was inaugurated by former US president Donald Trump and Prime Minister Narendra Modi. The stadium now christened Sardar Patel Stadium is the biggest-capacity ground in world cricket with a capacity of 110,000 seats.

Both the squads are scheduled to land in Chennai by January 27 and will straightaway enter a bio-secure bubble, which has become a norm in all cricket. The teams would start their training after an initial three-day quarantine.