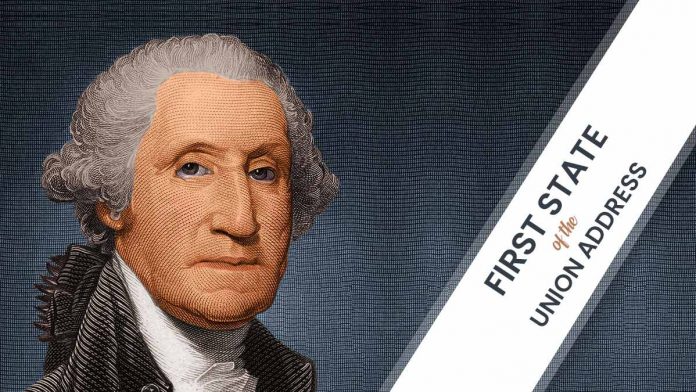 First State of the Union Address

At the beginning of each year, the President of the United States delivers a message to a joint session of the Congress. It includes details of the budget, the economic situation of the country, matters on the legislative agenda and national priorities. It fulfills the requirement of the US Constitution, which mandates that the Congress be kept updated about the State of the Union. In the initial years, only a written document was submitted and later it started being delivered as an address to the Congress. With the advent of visual media technology, it is now broadcasted live across many networks.

On January 8, 1790, George Washington delivered the first of the annual addresses. It was delivered before a joint session of Congress in New York City. The first State of the Union talked about the challenges faced by the young nation and its expectations for the future. It also covered the accession of North Carolina, circumstances available for national prosperity, preparedness for war, creation and maintenance of a good army, the naturalization process for foreigners, an invitation to citizens to contribute towards the growth of the country, advancement in fields of agriculture, commerce and manufacturing and promotion of science and literature. He nudged the nation and its citizens towards acquiring a knowledge of their rights and reminded the house of their duty towards the country. This address set an example of what was expected of the Presidents who would be Washington’s successors.