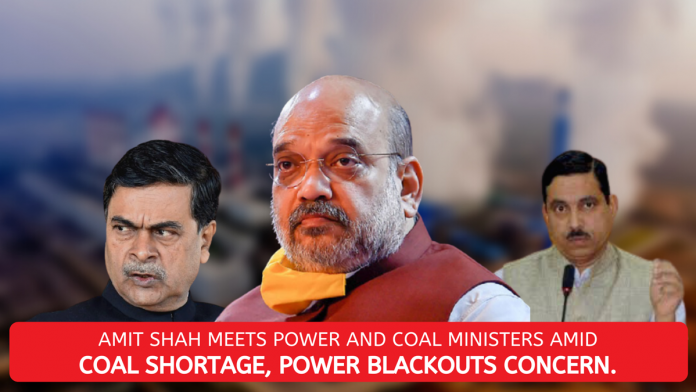 On Monday, Union Home Minister Amit Shah held a meeting with Power Minister R K Singh and Coal Minister Pralhad Joshi amid concerns of an electricity shortage in many parts of the country because of inadequate supplies of coal.

During the hour-long meeting, the three ministers were believed to have discussed the availability of coal to power plants and the current power demands. The meeting was attended by senior bureaucrats as well as officials from the state-run energy conglomerate NTPC Limited.

Several states have warned of blackouts even though the central government has assured that India has ample coal stocks to meet the demand of its power plants, seeking to allay fears of imminent blackouts in New Delhi and other cities.

The current fuel stock at coal-powered plants is about 7.2 million tons, sufficient for four days, the Ministry of Coal said in a statement on Sunday. Government-owned mining giant Coal India also has a stock of more than 40 million tons which is being supplied to power stations. The Ministry said that any fear of disruption in power supply was entirely misplaced. The clarification came a day after Delhi Chief Minister Arvind Kejriwal warned of a looming power crisis in the megacity which is home to over 20 million people.

Several regions across India have been hit by supply shortages in recent months, with utility providers resorting to unscheduled power cuts.

According to the data, the power consumption of 3,900 MU on October 8 was the highest this month so far (from October 1 to 9) which also became a cause of concern during the ongoing coal shortage.

On Saturday, Tata Power arm Tata Power Delhi Distribution Ltd (DDL), which operates in North and Northwest Delhi, had sent phone messages to its consumers . The message says, “Due to limited coal availability in generation plants across the north, power supply scenario between 2-6 pm is at critical level. Kindly use electricity judiciously. Be a responsible citizen. Inconvenience caused is regretted – Tata Power-DDL.

The Ministry of Power in a statement issued on Saturday had said, “It was noted that on 7th October, 2021 total dispatch of coal by Coal India limited (CIL) touched 1.501 MT, thereby reducing the gap between consumption and actual supply.”

The Ministry of Coal and CIL have assured that they are making best efforts to increase dispatch to the power sector to 1.6 MT per day in the next three days and thereafter, try to touch 1.7 MT per day. It is likely to help in gradual build up of coal stocks at power plants in the near future. The coal supply as well as consequent power situation is likely to improve.

The shortage in India, the world’s second-largest coal-consuming country, follows widespread power outages in China that have shut factories and hit production and global supply chains.

Coal accounts for nearly 70 per cent of India’s electricity generation and around three-quarters of the fossil fuel is mined domestically.

In an annual proliferation index, Broker discovery and comparison platform BrokerChoose, has revealed that India, with 10.07 crore users,...

Traffic Jam In the Suez Canal Leaves A Severe Impact On...