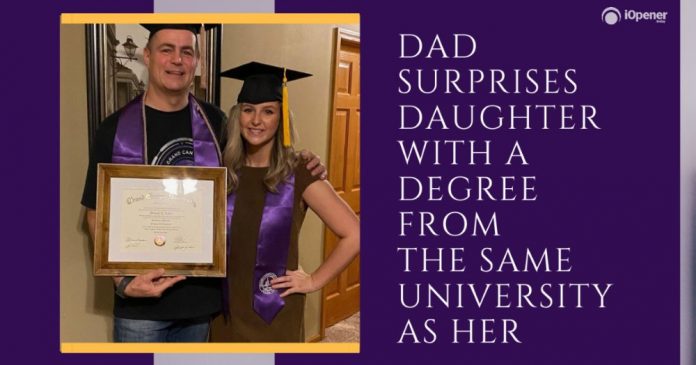 In another instance true to the saying, ‘learning has no age bar’, an Illinois family celebrated not one but two graduations.

Speaking about the beginning of it all, Loven said –

“It really was like keeping a secret for Christmas. It was just four and half years.”

“June 6th, 2016, I woke up in the middle of the night just with a feeling from God that I was going to go back to school and get my degree. And I was going to do it as a surprise to my family” , he explained.

After having a family get-together, it seemed like the perfect time to make a reveal.

“I was shocked when I saw the diploma; it took me a second, I was like, wait a second that’s his name; he’s wearing a cap and gown and then I just started sobbing, saying how proud I was of him.” Loven’s daughter Taleigh told CNN.

Speaking about the reason why he hadn’t pursued it earlier, Loven said, “I just never really felt it was for me, until now.”

The toughest part about the whole thing, Loven says, was the stressful midterm seasons when his wife, son and daughter – who were all studying at various universities at the time – would ask him for help with school-related issues and he couldn’t tell them that he had his own schoolwork to worry about. That, he says, resulted in many late nights at the computer.

What’s next for the father-daughter graduate duo?

“Definitely no master’s degree for me,” Loven told GMA. “But Taleigh is already on her way towards a master’s in psychology. I’m so proud of her.”

All celebrations are meaningful when we get to share them with the ones we love & care about. And...
LifeBytes

Marriage can be technically defined as a contract between two individuals who agree to be united legally, economically, and...
Think Why

Can you say that you have been able to live up to it?