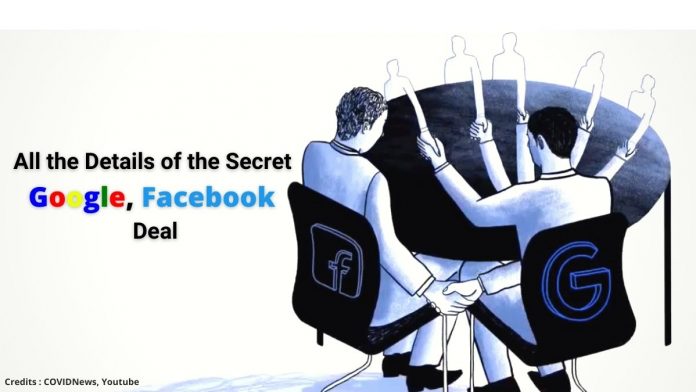 All the Details of the Secret Google, Facebook Deal

Adversity can sometimes bring together even the most unlikely allies, and that is exactly what has happened in the online advertising sphere, as search engine giant Google has forged a secret partnership with social media giant Facebook, thereby warding off competition in the space. These are revelations from court filings from the Federal Court in Texas, as part of an antitrust lawsuit brought by the Attorneys General of 10 states in the US.

According to the said documents, the two internet behemoths have agreed to “cooperate and assist one another,” in case there is an investigation into the said deal regarding online advertising, reports the Wall Street Journal.

Allegedly known as the Jedi Blue, the pact is known to have been a ‘sweetheart deal’ for Facebook, as offered by Google. The antitrust case, brought in by 10 Attorneys General of Republican-ruled states, led by the state of Texas, say that the deal was made back in September 2018 – wherein Facebook agreed not to compete with Google’s advertising product in exchange for favourable terms when the social media giant itself used those products.

The deal is concerning programmatic advertising, wherein in the shortest periods of time (possibly milliseconds) between a user clicking on a link to open a webpage and the ads loading on the same, ad exchanges are assessing bids that will determine which of the ads gets space on the webpage. Given that Google is a dominant player in ad exchange and ad servers, it usually directs the traffic to its own exchange.

However, the emergence of Facebook as one of the biggest ad buyers on the internet, which supported a new method bypassing the Google Ad exchange known as header bidding, was of grave concern to the search engine giant. Some within Google even termed it an ‘existential threat’ to the future of the company’s revenues.

According to the filings, both companies were aware of the antitrust case that could be made against the deal and articulated the same in the subsequent paragraphs of the deal, specifying how to handle such a scenario, should it ever arise.

Presenting the sequence of events, the court filings indicate that Facebook was in the process of testing a new online adverting tool that would have been a direct competitor for Google’s products, and threaten its control of the online advertising space. Curiously, it is pointed out that Facebook did a volte-face on the product whilst also deciding to join a combined effort by a group of companies, led by Google.

Facebook never sufficiently explained the reasons behind pulling back from the project publicly, but now the court filings reveal that it was due to some very favourable terms that the search-engine giant presented in lieu of such a decision.

According to the New York Times, there are over 20 companies in the alliance and six of them have indicated that the terms of the agreement between Facebook & Google are far more favourable to Facebook than those which they themselves had received. Each of these executives spoke on condition of anonymity, given that possible exposure could be detrimental to their own businesses.

“The disclosure of the deal between the tech giants has renewed concerns about how the biggest technology companies band together to close off competition,” says the Wall Street Journal.

However, both Facebook & Google deny any culpability and instead say that such deals were commonplace in the online advertising space, and that there was nothing amiss with such an agreement.

Google Spokesperson Julie Tarallo McAlister says that the lawsuit filed is a misrepresentation of the agreement as well as the company’s overall advertising business. Both companies have similar alliances with others as well.

Meanwhile, Facebook Spokesperson Christopher Sgro informed that deals such as these are essential to increase ad revenues in ad auctions, helping both advertisers and publishers.

“Any suggestion that these types of agreements harm competition is baseless,” he says emphatically.

Critics, however, remain wary of all that the Big Tech companies have to say, because the word ‘antitrust’ appears no less than 20 times in the agreement itself, outlining how the two internet giants must cooperate and assist with one another in case such an eventuality presents itself. It has now indeed presented itself, and the outcome could well have far-reaching consequences.

Facebook
Twitter
Pinterest
WhatsApp
Linkedin
Email
Print
Telegram
Previous articleDad Surprises Daughter with a Degree from the Same University as Her
Next articleHistoric Win for India in Australia, Match & Series Wrapped Up in Brisbane

Google has just released the second beta for Android 12 which brings new features like the new privacy dashboard,...