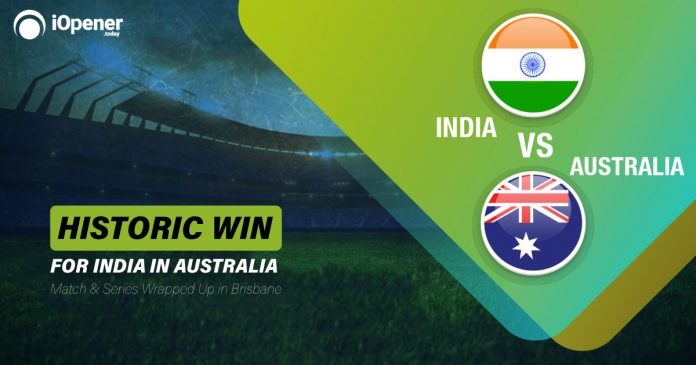 Historic Win for India in Australia, Match & Series Wrapped Up in Brisbane

The fortress has been breached. Team India inflicted one of the most crushing defeats in modern cricket memory, as they romped home to a 3-wicket win in Brisbane against Australia. India retained the Border-Gavaskar Trophy 2-1 to script one of the most remarkable turnarounds in cricket. Having been bowled out for just 36 at the Boxing Day test match, this would have been the most unlikely outcome at the end of the series.

Starting the day still 328 adrift, and a pitch not the best to bat on – a draw or an Australian win to square the series might have been the two most likely outcomes everyone expected. However, this Indian team has shown time and again in the series that they are made of much more steely resolve than others. Slowly but steadily they started chipping away at the target and with 36 overs still to be bowled at tea, all the results were still on the cards in Brisbane.

First Shubman Gill and then Rishabh Pant played starring roles, while Cheteshwar Pujara was the anchor around which the innings was built. The Australians were in no mood to surrender all too easily and dished out some hostile, short-pitched bowling all day long, and yet ran into a remarkably resolute Indian top order. Pujara, especially, copped a dozen blows and yet remained unmoved before Pat Cummins removed him with the second new ball.

The fall of Pujara and the arrival of the new batsman – Mayank Agarwal – rejuvenated the sagging Australian spirits, and it looked like it could be the worst Indians fear. But the last of the Indian batsman held on, while Rishabh Pant – much criticized for his work behind the wickets – played yet another stellar role in taking India home.

Australia, at full strength – playing India which almost had a frontline playing 11 missing for a variety of reasons, lost its citadel that is Brisbane – for the first time in 32 years.
Speaking at the post match presentation, Indian skipper Ajinkya Rahane was speechless and said that it meant a great deal to his team to have won the match and the series.

“It was all about intent. Credit to Pujara, the way he handled the pressure was magnificent. Rishabh and Washington were very good at the end. Taking 20 wickets was the key, so we opted for 5 bowlers. Sundar brought the balance in place of Jadeja.
The intention was clear to play five bowlers. Siraj played two Tests, Saini just one, so it was inexperienced but the character shown by the bowlers and everyone else was incredible,” said the proud skipper who stepped in after regular Indian captain Virat Kohli had to return home on paternity leave.

Meanwhile, Tim Paine, the Australian skipper who’s come in for a fair share of criticism for his conduct after Sydney will now have a lot of soul searching to do. He called the Indian team lot more disciplined and tough, fully deserving of the win.

“I thought India turned up today, wore balls on the head arm and chest, put their body in the line, so credit to them, they deserve the win. Keeping is a part of my job, and I have to get them right. Our bowlers did really well as well, it’s just credit to the Indian side for this terrific series,” Paine said.

Rishabh Pant was rightfully adjudicated the man-of-the-match, while Pat Cummings took home the player of the series gong.
Most of the Indian players have been away from home for six months now, having flown straight from Dubai into Australia. The quarantine, the criticism, racism and all things considered, this was both a historic and a sweet win for this mighty fine side.

India wrapped up the South Africa second innings on 191 and won the opening Test in Centurion by 113...