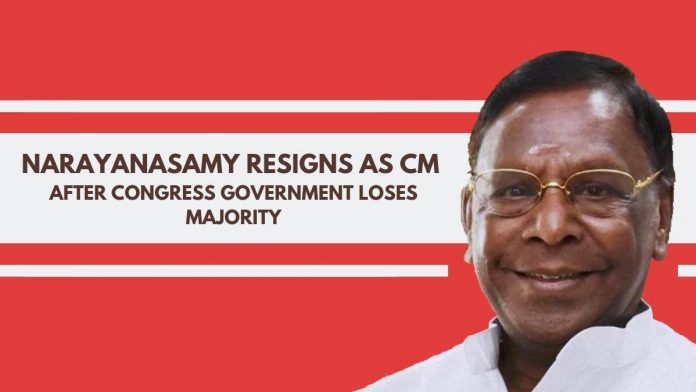 On Monday, Speaker of Puducherry Assembly, VP Sivakozhundu, announced that V Narayansamy government has lost its majority in the Union Territory. V. Narayanasamy submitted his resignation as chief minister and the resignations of his Council of Ministers to Lt. Governor Dr. Tamilisai Soundararajan, after stepping out of the Assembly. Soundararajan was sworn in last week, after the former Lt. Governor Kiran Bedi was removed from the post

After a series of resignations, the Congress-DMK have 12 MLAs (including an Independent who is supporting the government) in the House whose effective strength is now 26, while the opposition alliance has 14 MLAs. Four Congress MLAs, including ex-ministers A Namassivayam (now in BJP) and Malladi Krishna Rao had quit, while another party legislator was earlier disqualified.

The floor test was ordered by the Lt. Governor after a demand for the same came from the Opposition led by All India NR Congress founder N Rangasamy on Thursday, the day Congress leader Rahul Gandhi visited Puducherry to prepare for polls due in May.