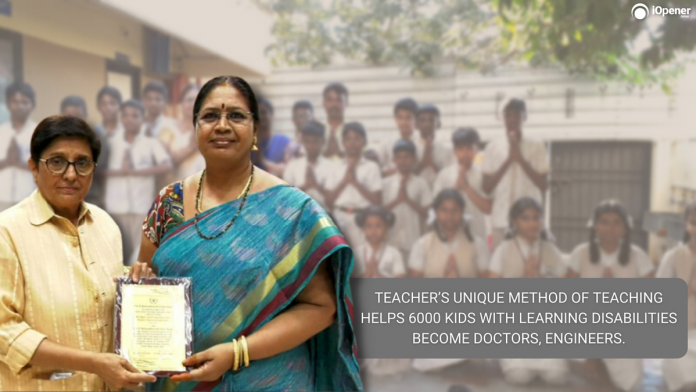 Dr Bhuvana Vasudevan from Puducherry came to the rescue of slow learners and students with developmental disorders to help them succeed when other teachers and even their parents gave up on their fate.

She added that she always wondered why some of her students struggled to understand a subject while others did not. So, she decided to identify the non-performers. “I decided to identify the non-performers and did a bit more research on them. At the time, there was no internet or YouTube for me to quickly access and understand the student’s issues. I could only rely on books and observing the subjects. I prepared files for about 15 children studying in Class 7 and registered data on where they lacked in performance,” she stated. Then she came to know that the conventional methodology would not work for these students and she would have to make changes to her teaching methodology. “The students needed additional efforts and a different approach to make them understand the subjects. I took cues from psychology and created flash and colouring cards to add a twist to my teachings. I showed them words individually, taught them spelling through phonetics and used Sanskrit verses from the Tamil language to improve their pronunciation,” she explained.

She then assessed students based on their improvement in comprehension skills and memory, their ability to complete an activity, etc. She started to conduct exercises for examining each student. “I also conducted exercises for examining the attitude and aptitude of each student and made notes based on such parameters. I included activities and games to ensure that my teachings were joyful and fun. At times I would make boards of alphabets and asked students to find the word around a room,” she said.

An extra couple of hour-long sessions conducted by Dr Bhuvana to implement unique methods bore fruits within months as students started performing better. She said that the students’ potential needed to get unblocked, and friendly behaviour along with rapport building helped to achieve the same.

In 1998, Dr Bhuvana opened Bridges Learning Vidyalaya at Thanthai Periyar Nagar to teach students with dyslexia, ADHD (attention deficit hyperactivity disorder), autism and other developmental disorders. She said that the school also accepts students who have behavioural concerns, undergone childhood trauma and slow learners. The police department also refers a few students who are under their observation.

The school teaches students from Classes 1 to 12 and follows the Puducherry Board syllabus. Every child’s IQ is tested using Malin’s Intelligence Scale and classified into mild, moderate and severe categories, depending on their abilities. Over the past 25 years, the school has taught over 6,000 students, many of whom are now doctors, managers, and engineers working in well-known corporations.

According to Dr. Bhuvana, many parents feel helpless when it comes to providing special attention to their child’s requirements. She said that the parents frequently expressed their need for someone like me to care for their child, and I am grateful that I am able to assist them.

TORCHBEARERS “A teacher takes a hand, opens a mind, and touches a heart.” Let’s go down the memory lane of our...
General News