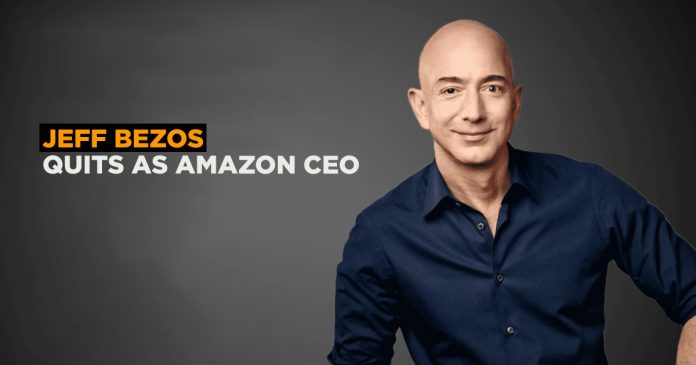 Jeff Bezos, the billionaire CEO & President of Amazon Inc, will step down from his role as the CEO and hand over the same to long-time associate and the current head of Amazon Web Services Andy Jassy. Bezos will move on to become the Executive Chairman of the Board of Directors of Amazon.

The transition will happen in the third quarter of 2021, even as Amazon remains one of the world’s most valued companies with a gross valuation of over $1.6 trillion and quarterly sales in excess of $100 billion worldwide. However, some of the pressing concerns the company is facing on a global scale include a raft of antitrust and monopolistic lawsuits, which the new CEO will have to handle to further the company’s expansion and growth.

Jeff Bezos made the rather surprising announcement in a note to the 1.3 million strong Amazon work force worldwide. “I’m excited to announce that this Q3 I’ll transition to Executive Chair of the Amazon Board and Andy Jassy will become CEO. In the Exec Chair role, I intend to focus my energies and attention on new products and early initiatives,” Bezos wrote.

Effusive in praise and expressing confidence in his successor, Jeff underlined the fact that Andy was well-known within the organization.

“He will be an outstanding leader, and he has my full confidence,” Bezos added.

Talking about his own role post-transition, Bezos explained that he will continue to stay engaged in all of Amazon’s important initiatives, while also giving his time and energy to his personal initiatives & interests such as the Day 1 Fund, Bezos Earth Fund, Blue Origin, the Washington Post and others.

“I’ve never had more energy, and this isn’t about retiring. I’m super passionate about the impact I think these organizations can have,” Jeff underlined.

Interestingly, Jeff’s company Blue Origin is locked in a tight battle for the honours in the private space travel race with SpaceX, the company owned by fellow-billionaire Elon Musk, who seems to have stolen a march over the rest of the competitors as SpaceX has already commissioned flights to the International Space Station. Musk also overtook Bezos as the world’s richest man earlier this year.