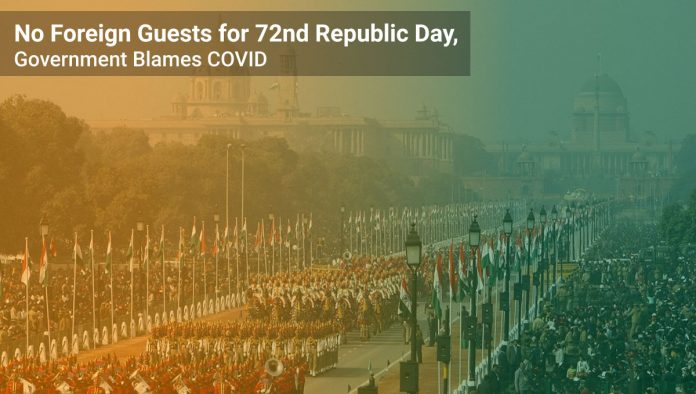 The 72nd Republic Day will be a distinctly less grand affair with no foreign dignitary present for the celebrations, the Ministry of External Affairs announced. Earlier, British Prime Minister Boris Johnson had been invited but he expressed his inability to attend due to the surge in corona virus cases in Britain, while Suriname President Chandrikapersad Santokhi was also in the mix, but eventually talks did not materialize.
Thus, for the first time in almost five decades, the Indian Republic Day celebrations will not have any foreign leader in attendance. The government spokesperson informed that the ongoing corona virus crisis is the primary cause.

“Due to the global Covid-19 situation, it has been decided that this year there will not be any foreign head of state or government as the chief guest for our Republic Day event,” said Ministry of External Affairs spokesperson Anurag Srivastava.

This year’s parade will also be shorter in duration and involve fewer participants, while there is also a restriction in the number of audiences allowed for the event on Rajpath, given the corona virus restrictions in the capital. However, despite the challenges, a 112-member contingent from Bangladesh will be part of the parade, making it only the second instance of a foreign contingent taking part in the prestigious parade.
The government spokesperson informed that this was to commemorate the 50 years of diplomatic relations between the two countries.

“This is testimony to our ties, which are forged in shared sacrifice. This year will be historic in our relations as we are also commemorating the 50th anniversary of [Bangladesh’s] liberation war,” Srivastava added.

India has a long tradition of foreign dignitaries gracing the Republic Day parade – which is an annual showcasing of the country’s military might and diverse cultures. The day commemorates the coming into effect of the Indian Constitution – making India a constitutionally governed republic.
This year will be only the fourth instance of the celebrations being conducted without a foreign dignitary – 1952, 1953, and 1956 being the only other rare instances. In the recent years, the government of India has used the occasion for inviting several high-profile foreign leaders and those with whom the country has had a strategic partnership as a sign of friendship & significance of such leaders. In the recent past, the list of invitees include former American President Barack Obama, Japanese Prime Minister Shinzo Abe, French President Francois Hollande, the Crown Prince of Abu Dhabi, and a 10-member group of ASEAN heads of states in 2018.

Historic Win for India in Australia, Match & Series Wrapped Up...