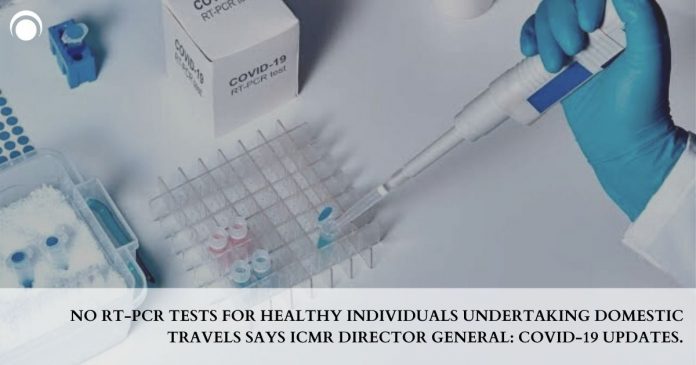 In terms of rationalization of RT-PCR tests, the Indian Council of Medical Research (ICMR) said on Tuesday that the RT-PCR must not be repeated in individuals tested positive once either by RAT or RT-PCR. No testing is required for recovered individuals at the time of hospital discharge and there is no need for RT-PCR tests in healthy individuals undertaking inter-state domestic travel.

Emphasizing that early testing, isolation and home-based care is the key to control transmission, Dr Bhargava said, “The RT-PCR testing capacity is about 16 lakh per day in our laboratories and RAT capacity is also around 17 lakh per day.” “Laboratories are working 24X7 to meet the increased testing demand. Despite infection among laboratory staff, test performance is still being maintained,” he said. Bhargava said that in the months of April and May, they were doing, on an average, 16-20 lakh RT-PCR and RAT tests combined per day. “So, we are hovering around 18-20 lakh per day except for on Sundays when we find a dip of one or two lakh,” he said.

Bhargava also stressed on increasing the usage of Rapid Antigen Tests in rural and hard to reach areas to ensure faster isolation. He also recommended setting up multiple 24X7 RAT booths in cities, towns and villages. He further said RATs are to be allowed at all government and private healthcare facilities and no accreditation is required.

“We have found that younger people are getting slightly more involved because suddenly they have gone out and there are variants also prevalent in the nation which may be affecting them as well,” he said. Bhargava said that if one has fever with or without cough, headache, sore throat, breathlessness, body ache, recent loss of taste or smell, fatigue, diarrhea, then they should be tested immediately, and while awaiting test results, they should be isolated. He said some people make the mistake of monitoring pulse rate, and those in home isolation should not confuse pulse rate as oxygen saturation.

Meanwhile India is facing a vaccine shortage across the country as it battles a second wave of the Covid-19 pandemic. State-owned airline Air India has cancelled its proposed vaccination drive which was planned for 11th and 13th of May due to shortage of vaccines. “Only 2 companies are producing vaccines. They produce only 6-7 crore vaccines a month. This way, it’ll take over 2 yrs to vaccinate everyone. Many waves would’ve come by then. Important to increase vaccine production on war footing & frame national plan to vaccinate all,” said Delhi Chief Minister Arvind Kejriwal on Tuesday while suggesting to the Central government.

As India reels under a devastating second wave of Covid-19 infection, more than two thirds of its states have extended lockdowns. States like Delhi, Kerala, Jammu and Kashmir, Haryana, Uttarakhand, Uttar Pradesh, Madhya Pradesh, and Chhattisgarh will be in complete or partial lockdown for one more week. States like Telangana, Tamil and Nadu and Karnataka will be in lockdown for 2 more weeks. Whereas states like Maharashtra and Rajasthan have imposed curfew till month end.

Use Lockdown as the Last Option: PM Modi In Address to...