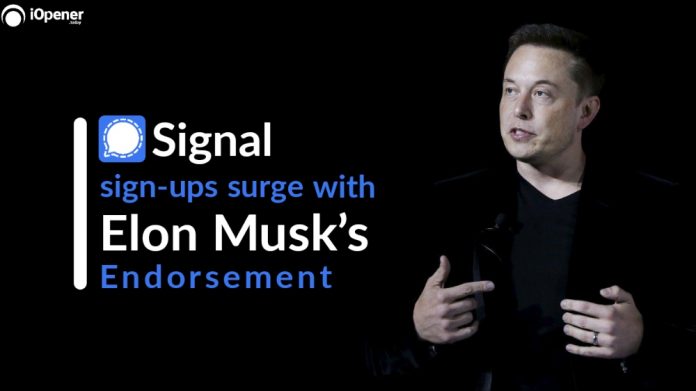 Newly-crowned world’s richest man, Elon Musk endorsed the Signal App as a much better and more private messaging app, and this has led to a huge surge in sign-ups for the messenger. Musk’s endorsement comes in the wake of WhatsApp’s changes to its privacy policy and a huge furore worldwide following the announcement of the changes.

Signal surged to become the number one downloaded app on the Apple app store’s free apps category. This wasn’t just in India; it also remained on the top of the charts in Germany, France, Austria, Finland, Hong Kong, and Switzerland.

“Use Signal,” was Musk’s simple prompt to his social media followers on Twitter. And it led to an explosion of new users, which almost crashed the messenger’s systems, leading to delays in verification codes being sent out, which is essential to the activation of the service. But signal wasn’t quite complaining as a statement from the company said, “Verification codes are currently delayed across several providers because so many new people are trying to join Signal right now (we can barely register our excitement). We are working with carriers to resolve this as quickly as possible. Hang in there.”

Elon and several others have been very critical of WhatsApp & Facebook’s new privacy policies which compel WhatsApp users to allow its parent company Facebook & its subsidiaries to collect user data – including phone numbers & location. It is almost as if you either accept the sharing of the data or you no longer are welcome on these platforms.

Following the change in policies, there has been a rapid escalation in the downloads of WhatsApp-rivals Signal & Telegram. More than 100,000 users installed Signal across the app stores of Apple and Google in the last two days, while Telegram picked up nearly 2.2 million downloads, according to data analytics firm Sensor Tower. New installs of WhatsApp, on the other hand, were down 11%, in the first week of the year.

In addition to Elon, Signal has several prominent backers, including Twitter CEO Jack Dorsey and data privacy activist Edward Snowden. According to Signal, “neither we can read your messages or listen to your calls, nor anyone else. Privacy is not an optional mode; it is how Signal works. In all your messages, all your calls, forever”, they explain on the platform’s official page.

Adding to its lure, the company also emphasizes that there are no advertisements, no sellers, no affiliates.

As a sidebar, Elon Musk’s endorsement of Signal led to an unintended benefit for another company – Signal Advance – resulting in a 1100% surge in its stock price in just two days. The share price of the hardly known company went from just $0.60 to $7.19 in a matter of 48-hours.

Signal, the messaging app, was quick to clarify this on its Twitter handle saying,
“It’s understandable that people want to invest in Signal’s record growth, but this (Signal Advance) isn’t us. We’re an independent 501c3 and our only investment is in your privacy.”

Apple is clearly setting some high standards with data privacy, and any amount of work arounds by apps are...
General News