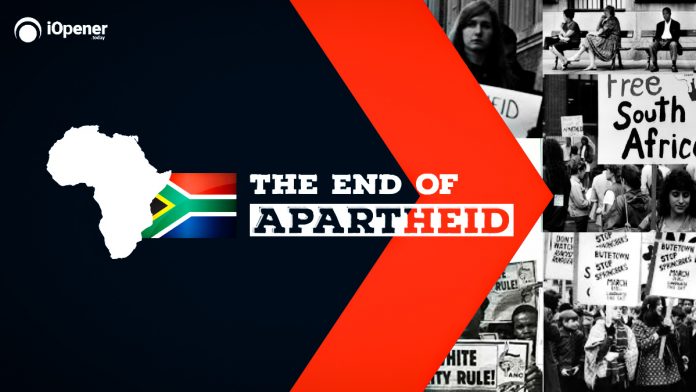 Apartheid in Afrikaans means ‘apartness’. It was a government legislation that strictly regulated relations between South Africa’s white and non-white citizens. The policies under it were politically and economically discriminatory and segregated the minority whites from non-white majority. It was an extremely oppressive regime towards the non-white population. They were forced to live in separate areas and use different public facilities.

Often called as ‘separate development’, apartheid was implemented through Population Registration Act, 1950. The act classified all South Africans into black Africans (Bantu), mixed race (Coloured), white and Asian (Indian and Pakistani). Other Acts minimised social contact between the races, established separate educational standards, constrained races to specific jobs, cut down non-white unions and denied non-white participation in the government. It was faced with strong and consistent opposition from within and outside South Africa. However, the laws remained in effect for about 50 years.

On February 2nd 1990, President F. W. de Klerk announced some ground-breaking reforms, beginning a transition from apartheid to democracy. His government began to revoke the laws that upheld apartheid. Along with Nelson Mandela, he went on to create a new constitution for South Africa, for which they shared the Nobel Peace Prize in 1993.

On this day February 11th, 1990, Nelson Mandela was released from prison after 27 long years of imprisonment.For those...
Daily Digest

January 20th, 2009 was a historic day for most African-Americans. Barack Hussein Obama was inaugurated as the 44th President...