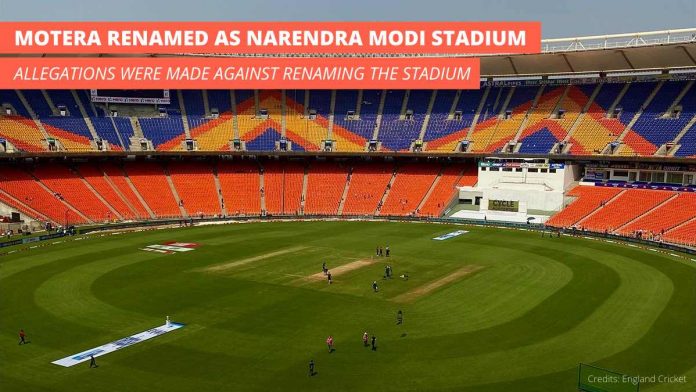 Motera Renamed as Narendra Modi Stadium, Allegations were made against renaming the Stadium

President Ram Nath Kovind inaugurated the world’s largest cricket arena, the Motera Stadium on Wednesday, which was renamed as ‘Narendra Modi Stadium.’ The Sardar Patel Stadium, also known as the Motera stadium, has now been renamed after the Prime Minister, who was also formerly a president of the Gujarat Cricket Association.

Home Minister Amit Shah and Sports Minister Kiren Rijiju, along with the Board of Control for Cricket in India (BCCI) secretary Jay Shah, were also present at the event.

The Narendra Modi Stadium hosted its first international match on Wednesday, when India took on England in the Day-Night Test.

President Kovind mentioned that the stadium was conceptualised by the Prime Minister. He said, “This stadium was conceptualised by Prime Minister Narendra Modi when he was Chief Minister of Gujarat. He was president of the Gujarat Cricket Association at that time. It is an example of eco-friendly development.” he said in his address after the inauguration.

Home Minister Amit Shah said, “1,32,000 people can sit and watch cricket here at the Narendra Modi Stadium which has been inaugurated by the President. This will be the world’s biggest sports stadium. Coupled with Sardar Vallabhbhai Patel Sports Enclave and Narendra Modi Stadium in Motera, a sports complex will also be built in Naranpura. These three will be equipped to host any international sports event.”

He added, “Ahmedabad will be known as the ‘sports city’ of India. Olympic Games can also be held here.”

Sports Minister Kiren Rijiju said, “Not just for cricket but it’s a proud moment for India. Besides being the largest cricket stadium, it’s also one of the most modern stadiums in the world. As children, we used to dream about the world’s largest stadium in India. And now as sports minister, my happiness knows no bounds that this has finally happened.” .

The Narendra Modi Stadium will host the third and fourth Tests between India and England as well as the entirety of the five-match T20I series between the two sides.

However, soon after President Ram Nath Kovind inaugurated the Stadium, the social media was flooded with remarks that the renaming exercise amounted to an “insult” to Sardar Patel. Rajeev Satav, a Congress leader, said, “Renaming Motera cricket stadium from Sardar Patel to Narendra Modi is an absolute disgrace. This shows how narcissistic our PM has become. This is outrageous and a clear sign of autocratic dictatorship,” he said.

Union Minister Prakash Javadekar told reporters that only the Motera stadium has been renamed and the complex continues to be named after Vallabhbhai Patel. He further said that Narendra Modi Stadium is part of a larger complex, named ‘Sardar Patel Sports Complex’.

The Union Minister Ravi Shankar Prasad, who was addressing the media after attending a cabinet meeting, retorted by saying that the Congress leaders Sonia Gandhi and Rahul Gandhi had never praised or visited Sardar Patel’s statue, the world’s tallest, in Gujarat’s Kevadia, news agency PTI reported.
“I want to say this with full responsibility that a tourist place getting global praise has not been visited yet or praised by the two Congress leaders. What else is there to say?” he said.