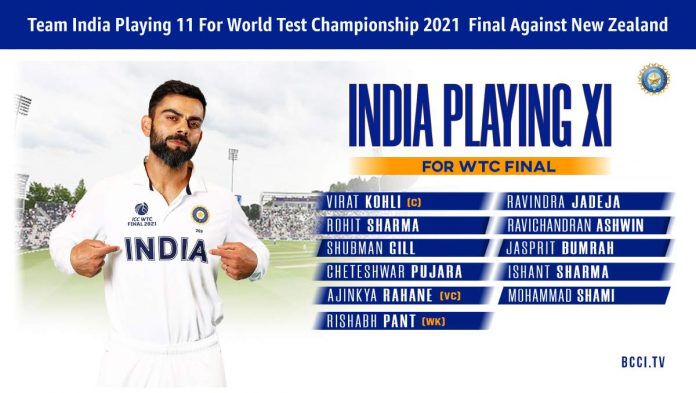 India and New Zealand are all set to lock horns in the finals of the inaugural World Test Championships on Friday, June 18 2021. Team India on Thursday, announced the playing XI and decided to go with a five-man bowling attack – with two spinners included. The Indian think tank has gone with experience over exuberance, as Ishant Sharma was selected to partner Jasprit Bumrah and Mohammed Shami, while R Ashwin and Ravindra Jadeja will handle the spin department.

This means that the much touted Mohammad Siraj, misses out from the final playing XI as does middle order batsman Hanuma Vihari.

Rohit Sharma and Shubman Gill will be the openers, followed by Cheteshwar Pujara, Virat Kohli and Ajinkya Rahane in the middle order. While, wicket keeper Rishabh Pant kept his place ahead of the more experienced gloveman Wriddhiman Saha. The southpaw is expected to provide the firepower for this team at the all important number six spot, while Ashwin and Jadeja are no mugs with the bat either.

However, the spin twins – Ravichandran Ashwin and Ravindra Jadeja – will play a more vital role on the Rosebowl pitch expected to assist the spinners as the game wears on.

Going into the finals, the Kiwis are a little better prepared than their Indian counterparts, as they recently beat England 1-0 in the Test series. This is bound to give them a huge morale boost ahead of the match versus India.

Meanwhile, Kohli who took over the Test captaincy from Dhoni in exceptional and difficult circumstances in the middle of the Australian series Down Under in 2014, will look to join his predecessor and the West Indian great Clive Loyld as the captain of an inaugural ICC Championship.

Since his taking charge, he has led India to victory in a stunning 16 of the 20 series he has been in-charge. This period includes an unbeaten run of 10 series (including 9 wins in a row) starting from a 2-1 win in Sri Lanka in August 2015 to a 1-0 win against the same opponents at home in November 2017.

On the other hand, New Zealand has won 13 of the 18 Test series under the leadership of Williamson. There have been four losses – away in South Africa and India in 2016, against South Africa at home in 2017 and in Australia in 2019.

Motera Renamed as Narendra Modi Stadium, Allegations were made against renaming the Stadium

President Ram Nath Kovind inaugurated the world’s largest cricket arena, the Motera Stadium on Wednesday, which was renamed as...

An Overview of Career Opportunities in Civil Engineering – Part 1