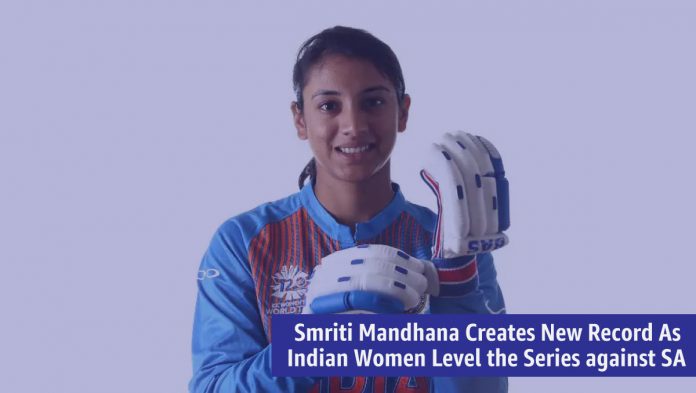 Smriti Mandhana, the Indian women’s cricket team opener scored a well-deserved half-century as the hosts registered a nine-wicket victory over South Africa in the second ODI to level the five-match series at 1-1 on Tuesday. With a blistering knock of 80 runs, the left-handed batter became the first-ever cricketer to smash 10 consecutive 50-plus scores in One Day Internationals during the run chases for the period of 2018 to 2020. With this half-century she went past New Zealand’s Suzie Bates who had nine successive 50-plus scores while chasing which she had achieved between 2015 and 2017.

In the history of cricket, no other male or female cricketer has scored more than six 50-plus scores in consecutive ODI chases.

Chasing a modest 158-run target against South Africa Women in the second 0DI, Indian women got off to a slow start when they lost opener Jemimah Rodrigues early. Smriti Mandhana then partnered with Punam Raut and added 138 runs for the second wicket as India finished the contest in 28.4 overs.

Mandhana scored 80 runs off just 64 balls, which included 10 fours and three sixes. She finished the match by hitting Nadine de Klerk for two consecutive boundaries in the 29th over.

Earlier, India skipper Mithali Raj won the toss and sent South Africa to bat. The bowlers did their job by taking two quick wickets within the first five overs, with veteran Jhulan Goswami and Mansi Joshi getting rid of the two openers.

After the first two quick wickets, South Africa’s batting was soon crushed by the Indian bowling and managed to score a modest total of 157 in 41 overs. Jhulan shined among the bowlers with her four-wicket haul, while Rajeshwari Gayakwad and Mansi Joshi took three and two wickets respectively.

After the 9 wicket victory, Jhulan said her side managed to execute their plans well in the game and displayed a disciplined bowling attack.

“It was absolutely a team effort. We managed to execute our plans. Today was a much-disciplined bowling attack… In the first match, the performance was not up to the mark. In this match, whatever we planned, we managed to execute it,” Jhulan Goswami said in the virtual post-match press conference.

The next ODI of the five-match series will be played on March 12 in Lucknow.

Indian skipper Virat Kohli and debutant Ishan Kishan steered India to a seven-wicket win over England to level the...